How did you get into the houseboating rental business and how did your company grow? Houseboat Holidays is in its 46th year of operation. The company was started by my father and the father of my partner Mike Nicholl-Carne. Mike and I have been involved in some way or another for the 46 years. We started with 3 boats and started building additional boats, a couple every year, until we got to 25. We are presently renting 22. How busy does it get in the high season and how early should people book if they want to rent a houseboat in July or August? We have 3 different models that

we rent and the months of July and August are always completely booked. The last couple of weeks in June and the first 2 weeks of September are also very popular, but not 100% booked. The summer months will be fully booked (I hope) by the end of May – middle of June.

What are some of the advantages of going in the off-season like spring or fall?

island you wish, often having the entire island to yourself, especially if you rent during the weekdays. The weather in June is definitely warm enough and rarely gets uncomfortably hot. If swimming is your thing

September would be better than May – early June. Fishing in the Fall is at its prime with the season open for all the different species. Bass and Muskie seasons not starting until the 3rd Saturday of June.

In 2017 it seemed like a record high water levels for Lake Ontario and the St. Lawrence river. How did that affect the business and the area?

2017 saw record high water for Lake Ontario which affected a lot of people. Cottagers didn’t show because they had no docks, marinas were flooded as well and people just didn’t put their boats in the water. The National Park islands suffered a lot of damage to the docks and I would say that was the biggest problem for HH because our customers couldn’t

access all the islands and the docking at its worst point was down at about 50%.

You recently added kayaks for people to rent; how popular are these?

We also rent kayaks and paddleboards which seem to be very popular. They are great to just go out and explore around the islands where the houseboat can’t go. Since the National Park docks are on a first come first-served basis, sometimes people find themselves having to anchor for the night and the kayaks allow them to access the islands.

What are some of the “must-see” attractions in the area?

Some people like to visit all of the tourist attractions such as: Boldt Castle, the Antique Boat Museum and Singer Castle. Otherwise people just like to hide away in a secluded bay somewhere and tour the islands and ‘hang-out’ – visiting beaches, snorkelling, swimming and diving.

What are the important spots that houseboaters should be aware of?

There are 4 towns that people visit in the 1000 Islands, where they can find restaurants, food and fuel for the boat – e.g. Rockport and Gananoque on the Canadian side and Clayton and Alexandria Bay on the U.S. side. If they want to go west, they can go to the city of Kingston, which offers many tourist attractions.

What are the most frequently asked questions you get and of course what are the answers?

Question: “How much am I going to spend on fuel?”

Question: “How fast do they go?”

Answer: “Their cruising speed is around 6 knots.”

Question: “What do we need to bring?”

Answer: There is a list on our website but basically personal items, food, towels. Bedding and dishes are supplied.

What are some of the questions you get from customers that make you shake your head?

“Can we get to Niagara Falls?”

“When is high tide?”

“Do we need to worry about pirates?”

“Will the boat flip over in a storm?”

Surely you must have had some clients from hell. Tell us a story of the worst customer you have had.

A customer called and asked us if we knew where their boat was. They had anchored and gone out on another boat and when they returned their boat was gone. It turned out that the boat had drifted about 8 miles down river and into the shipping channel! Fortunately, everything worked out and the boat was rescued (unharmed).

Another time we had a group of 4 boats rented by some young, local people. It was a beautiful weekend and they headed to our local beach where they proceeded to have a huge party – complete with disc jockeys, picnic tables taken from the islands and approximately 100 people! The noise and music could be heard in Gananoque and surrounding islands! We received many complaints and thepolice were involved but the party finally broke up when I called their parents! One of our renters was going by the scene with his young family. His son asked him, “Dad, what is that?” and his father replied, “That, son, is what you call one heck of a party!!!”

People drive by the 1000 Islands area all the time on the 401, many have heard about the 1000 Islands region but don’t really know much about it. What makes this area so special and do you get many new customers that are surprised at what they see and experience?

I would say that what makes it so special is that the scenic beauty cannot be surpassed – , the water is clean and there is a multitude of things for people to do, as mentioned before – sightseeing, shopping, swimming, diving and snorkeling. The National Parks also make it a unique area. People, at the end of their trip, are so enthralled that they often book again right then and there. That is why 50% of our business are repeat customers.

My name is Peter Latchmore, 60 years old, married with 4 children, all who have worked for HH. Son Joe is currently working for us and has indicated he would like to carry on so it looks like a third generation will be renting houseboats in the 1000 Islands. 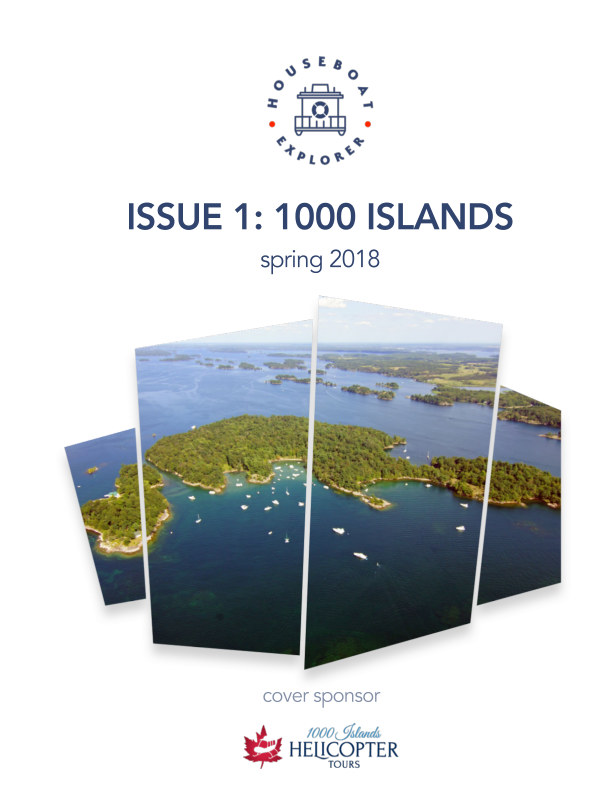